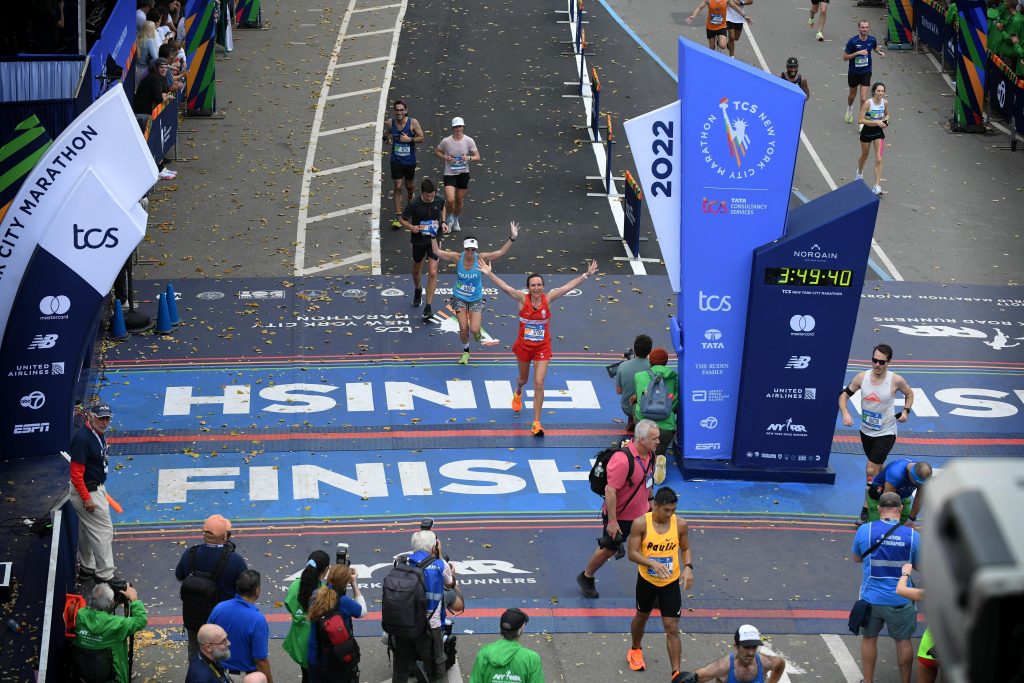 New York Marathon as seen through the eyes of Anna Liptak

It’s November, and I’m in New York with a team of 45 runners who have come all the way from Australia. My business Adventure Time Travel, is an approved international Travel Operator for the TCS New York City Marathon – for those that don’t know this means our company can offer guaranteed entry without the need to qualify or fundraise.

I’ve been lucky enough to visit New York in November five times before, and yet this time, seemed special, for all sorts of reasons. It was the first time the event had been run since the beginning of the pandemic – no marathon had been run in 2020 or 2021 – and you could feel the excitement and welcoming energy everywhere we went. Also, usually when we visit it’s bitterly cold. This time though, we’re all walking around in tshirts, and central park is alive with activity – children playing, locals picknicking, dogs running around.

Taking people halfway around the world to run a race that many have never done before and may never do again, is always an enormous responsibility. This year, I felt the responsibility more keenly than ever. 60% of our group had not run a marathon before so i wanted to ensure that they did not have to stress about a thing all week. My focus was on giving these people a memory that they would treasure forever and get the runners in the group to the Start Line of the Marathon.

Because so much of my attention in the lead up is on the team, I didn’t know how I would run this year. I’ve done it five times before and I have had my good days, and bad days. This time around, I knew I was feeling better than I had for a long time and if I felt ok on the day I had a good shot of running better than I had for a while. What does running well mean for me? It means running strong, feeling good within myself and confident in my ability.

For the past two years, I had suffered with what I thought was long term covid, however, it turned out that covid heightened an auto immune disorder that I did not know I had – narcolepsy – excessive sleep. I had suffered with this all my life. In fact I remember falling asleep on stage, falling asleep all the time at school and university and I had always declared if there was one thing I could go to the Olympics for it would be sleeping. This diagnosis changed my life and finally my fitness and health, which had declined quite rapidly was back! In some ways, getting COVID was a blessing, I don’t think I would have been diagnosed, as I did not fit the stereotype of someone with narcolepsy.

And here I am. I’m at the start line of the New York Marathon, and im feeling all the feels. They’re playing Frank Sinatra’s ‘New York New York’ and my eyes start welling with tears at the sheer joy of actually being here. Finally after two years, the world is back together. I think of my mum who is starting to feel better after a long health battle. I think of my dad, who turns 80 today, and my son, who turns 17. I write those numbers on my arms to honour two of the most incredible men in my life. And my travel business is back and here I am, with 75 people, about to undertake the BEST Marathon in the world, and to top it off, I’m actually feeling good! 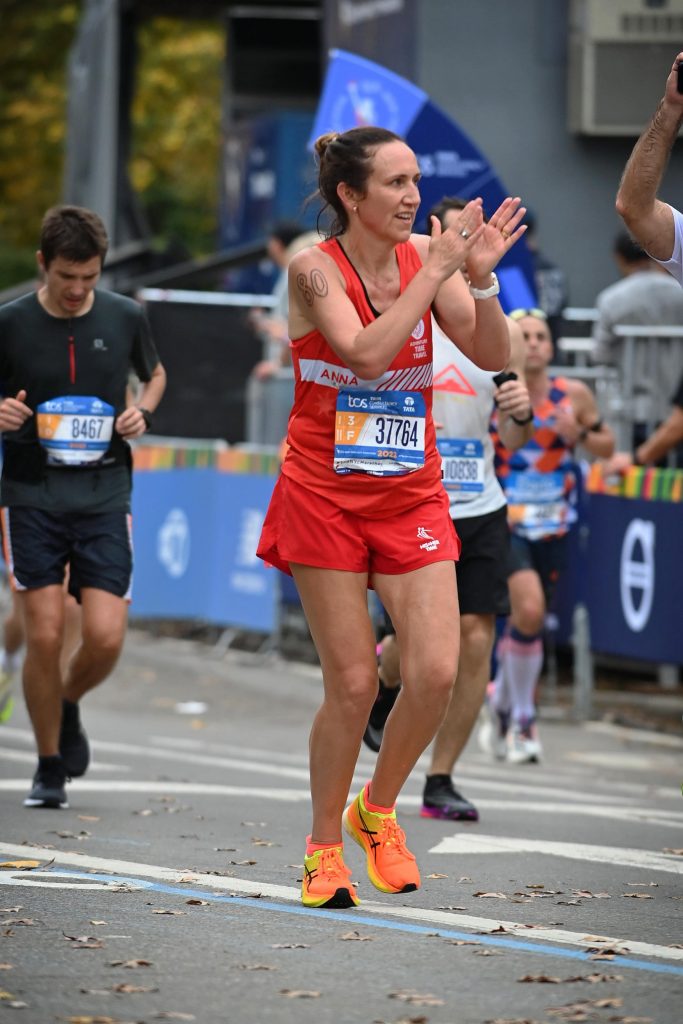 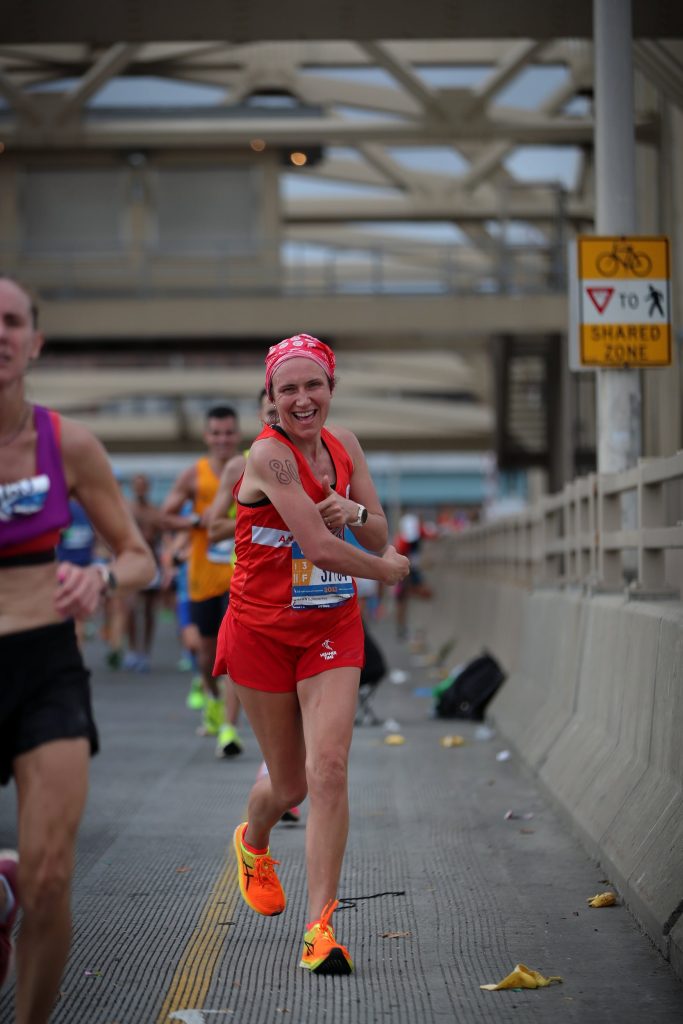 I am in wave 1, the gun is fired. I am in the Blue Coral which crosses over the Verrazano Bridge – I am swept up in the excitement with everyone else! “Don’t go out too fast, you will regret it” I had said to everyone else the day before, “the best run you can do is to negative split – which means you will pass everyone on the last 21kms rather than everyone else passing you”.

This is how I have usually run my marathons, but it turns out, not this one! I got carried away. My first 5kms were much faster than I had planned. Oops! That damn weird weather meant that the sun was also really hot and by the time I got to the 15km mark I knew this was going to be a tough mental day at the office!

The spectators are always such a part of the race experience, and this year, 2 million spectators came out to cheer us on – and boy did they help me! I am not sure if each person who comes out to cheer realises how important they are – but their energy, passion really enables you to keep running – even when your mind & brain is telling you to stop – get on the subway and get out of here! A big thank you to everyone for being so generous and kind, sharing their time and energy with strangers is super amazing and I and all the runners are so thankful.

Our supporters from Australia, which included one of my best friends, N’Tonya Surynt, were stationed at the 26km mark, just after the Queensborough Bridge. The knowledge of this truly kept me going and when I reached them, . I was incredibly relieved, and happy. I wanted to stay and chat but they just willed me on!

Then I started trying to do the maths in my head…never my greatest strength, and certainly not when I am running a marathon…16.2kms to go….right dig deep Anna….I turned onto First Avenue – next stop the Bronx – right – let’s do this!!

The heat was getting to a lot of people and I saw probably about 30 people pass out on the side of the road..this was incredibly scary, however the first aid was on to all of them, so once again, my excuse to stop was taken from me again!

I decided that today was the day where each water stop I would walk and take a good drink of water, say thank you to the volunteers and regain some strength and try to cool down as much as possible. I had a head band which was wrapped around my wrist – I would pour water over this and use it to wet my face and head throughout.

This year I noticed the rolling hills and the inclines much more than the other five times I had run the New York Marathon (including my pb of a marathon in 2013, 3.29.57). Every incline and hill was excruciatingly hard particularly the last part up Fifth Avenue and the little hills in Central Park.

My quads were starting to feel like they were going to explode, particularly in the last 10kms. Last time they had felt like this was in the Great Wall of China Marathon – where my beautiful friend Kym Nelson caught up to me and saved my race by giving me salt tablets. Today I had no salt tablets – so there were many moments when I I really did not know if I would make it.

And then, somehow, here I am at the finishing line. And that sense of specialness that I’d been feeling all week – the strange weather, the excitement of a world uniting again, my family’s battles and the force of their love, and my love for them. I feel it all. In those brilliant, exhausted, elated moments, I am deeply thankful. What a year. What a life.

I take the long walk back to the hotel and put myself in the bath. My mind then turns back to my team. Where are they? How are they going? Did they run negative splits? Did they feel the hills today? It is so good to be able to track them all on the app. And one by one they finished – all 45 of them. Each with their own amazing stories and memories. 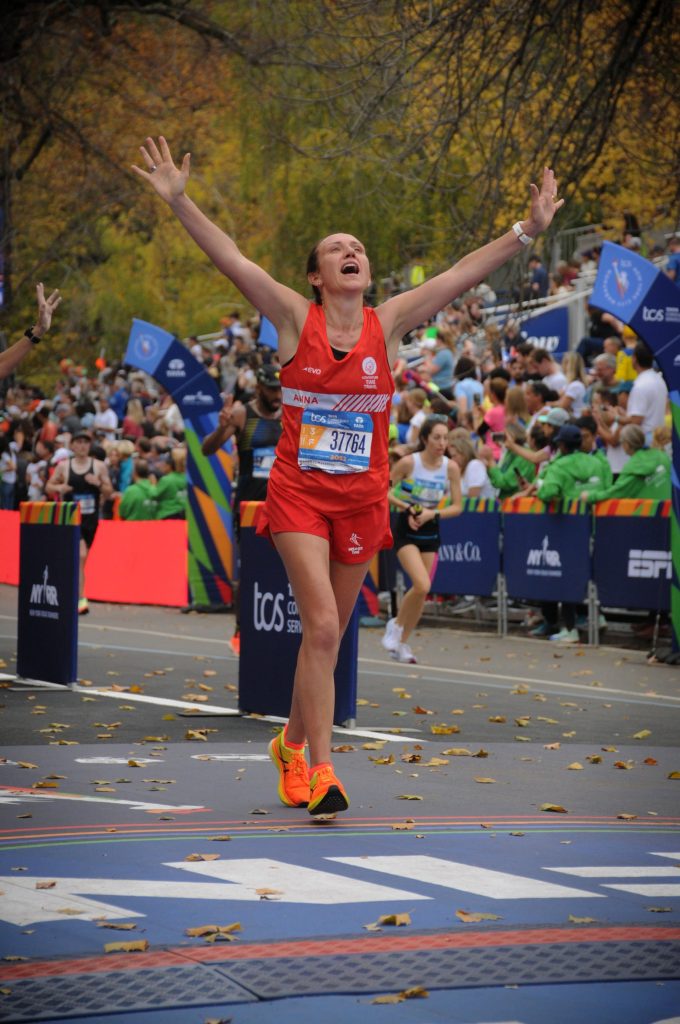 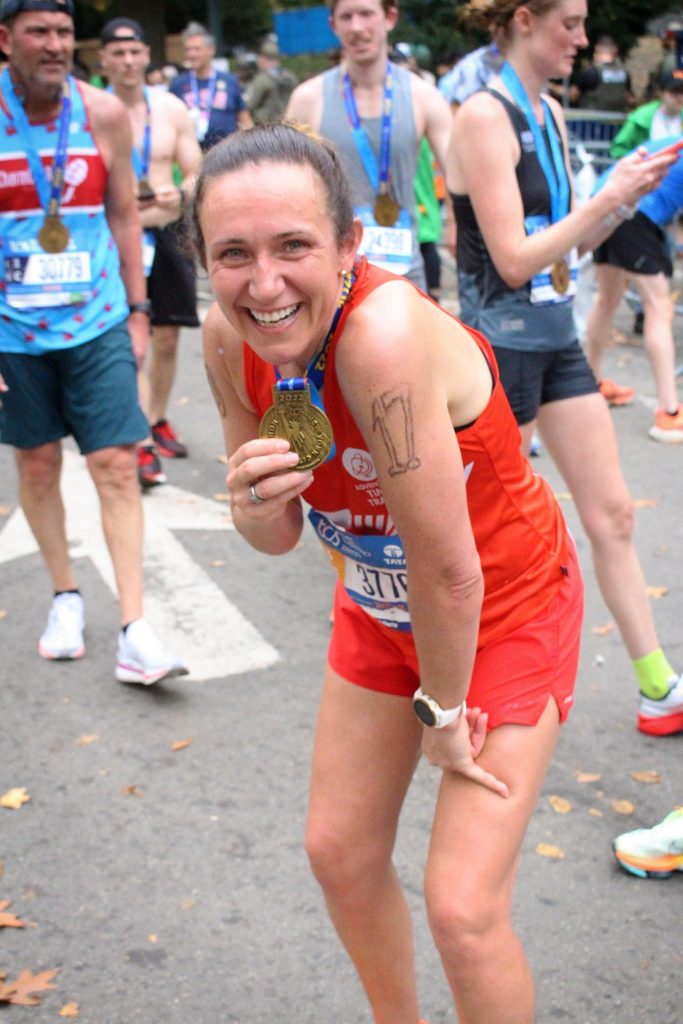