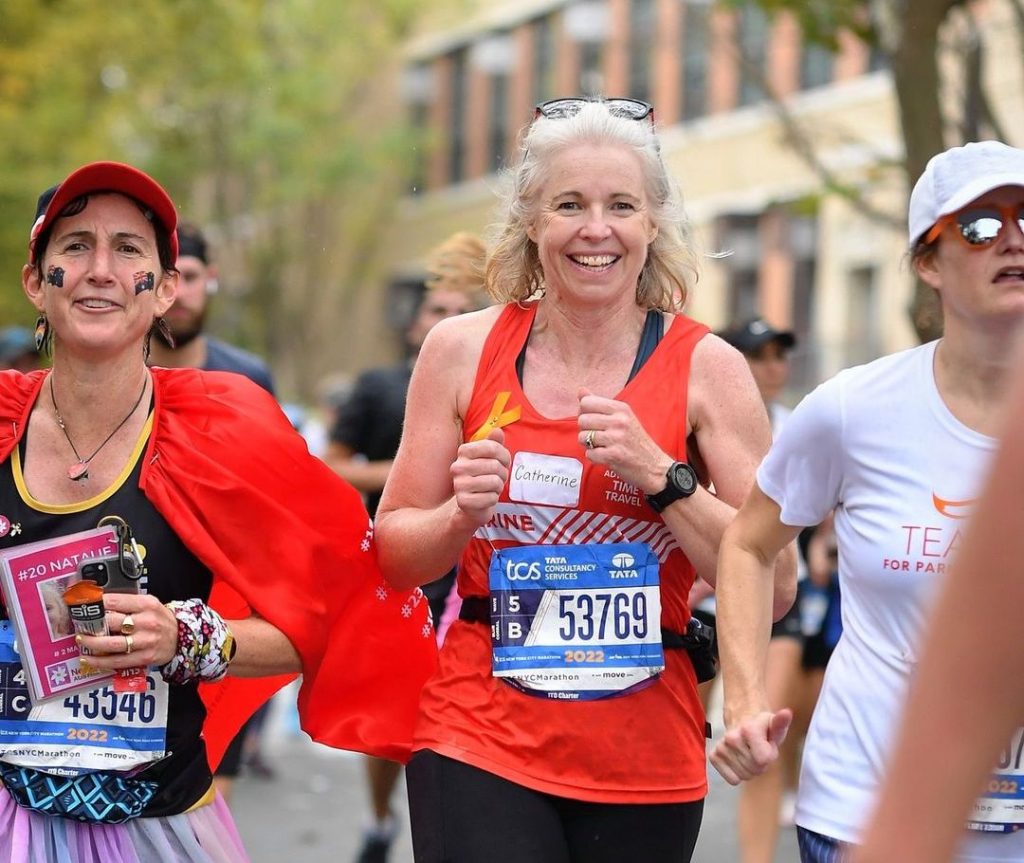 From being an 800 metre runner to learning about endurance running, Catherine shares her New York Marathon Experience – Catherine O’Dea

Catherine O’Dea recounts her journey to running the 2022 New York Marathon, starting from her decision to take up running after watching the movie “I’m Not a Runner,” and continuing through her training and preparation for the big day. Along the way, she discusses the challenges she faced, such as dehydration and learning to pace herself, as well as the support and encouragement she received from her friends and trainers. With a mix of personal anecdotes, reflections on her training and race day experiences, Catherine’s journey offers an inspiring and relatable account of what it takes to run a marathon.

In September 2021, I went along to watch my old school friend’s movie, “I’m not a Runner”. Whilst there, I caught up with another old school friend who tells me I walked out of the movie, saying, “I am going to run a marathon one day!”

Never in my wildest dreams did I imagine I would be doing it in 14 months and in New York!

“My journey as a runner began when I was 11 years old on the track, with 800 metres being my preferred event. My running continued through high school, with cross country becoming my winter sport. When our three older children started making teams for running, I coached them for district SAPSASA Athletics and Cross Country events. I continued running on and off by myself over the years with no specific goals in mind. That was until I watched I’m Not a Runner and reconnected with the inspirational Anna Liptak.

In December 2021, after a busy school year, I decided to join His and Her Time. After one session, I was hooked! To be able to train and spend time with like-minded people changed my view of keeping fit. Before training with His and Her Time, going for a run had become something I needed to tick off on my To Do List, and I often lacked the motivation to get out the door. Suddenly, with these early morning classes, I had something to look forward to every day.

His and Her Time challenged me as although I was ok at running, I had never tried strength or cross-training. The difference this type of training has made to my core and upper body strength has improved my running, which I had never included in my fitness training previously. Anna also introduced me to the importance of goal setting and training plans. The difference these have made to my overall motivation and well-being are immeasurable.

His and Her Time also opened up my friendship circle; for the first time since moving to the city four years previously, I made friends with people outside of the education field. One of those friends was Nat, who also enjoyed early morning runs and conveniently lived a few streets away. I also met Kerry and Alison, who made me laugh and convinced me that 2022 was the year to run the New York Marathon. A new way of spending time with friends emerged. Going for a run to catch up was like having a coffee, except it felt much better.

And so 2022 began with a series of half marathons, the first being Clare which taught me an invaluable lesson! With only 1.2 kilometres to go until the finish line, I blacked out due to dehydration and exhaustion, ending up in the hospital. I had misjudged the pace I needed to run early in the race by going out too fast in the first 10 kilometres. I learnt that despite being fit – I needed to listen to my body, stop at drink stations and slow down!

Fortunately, that did not deter me from entering the Barossa Half Marathon a few months later. I was very blessed to have Anna run alongside me to teach me some of the finer points of long-distance racing, including walking through drink stations and maintaining a talking pace throughout most of the race.

Before I knew it, I had completed another two half marathons. These runs of 21.1 kilometres, which had seemed a long way at the beginning of 2022, were now very achievable. And so the serious training for New York began! The first long run occurred in the October school holidays and continued every weekend. The post-recovery sessions at the local plunge pool and massages also became essential in my weekly training régime.

Sunday 6th November, the day of the marathon, finally arrived as a warm, humid autumn day. As I stood on Staten Island at the start line, I still could not believe that I was about to run one of the most famous marathons in the world along with 50,000 other runners.

I remember feeling tired even before I started, which I now realise was one of the Covid symptoms I had overlooked with the adrenaline of the race day. Fortunately, I ran with Nat, who was decked out in a red cape and tutu, to raise money for children with neuroblastoma. We received many cheers, which spurred us on and got us to nearly the halfway point, more or less on pace. I, however, had started to struggle and desperately sought water stations that seemed few and far between. We said hello to a friend at Mile 18, and then Nat said,’ You don’t look so good. I also don’t feel very well. Let’s walk’.

I remember being stunned, saying, ‘Really?’ Yes, said Nat, we need to enjoy the atmosphere and experience as this is a once-in-a-lifetime opportunity and we are not going to get a good time!

And so we slowed down, Nat walking and me running very slowly as walking did not agree with my hips. We danced to bands, and Gospel singers, high-fived many people and generally had a great time, the encouragement from the many spectators spurring us on.

We entered Central Park thinking we were close to the finish line; unfortunately, we still had 2 kilometres to go! On Fifth Avenue, I heard my host sister, from when I was an exchange student, calling out and cheering me on, and I knew I could make it! Finally, Nat and I crossed the finish line in 5 hours and 19 minutes. What a fantastic experience, one that I will never forget.

As I reflect upon 2022 and my marathon journey, I feel grateful that I chose to watch Anna’s movie that day in September. My mental wellness as a result of being surrounded by like-minded people has improved, and my overall fitness from training at His and Her Time has never been better!“

Adventure Time Travel offers a wide range of exciting events and experiences for thrill-seekers and adventure enthusiasts. Whether you’re looking to conquer a marathon, climb a mountain, or explore a new culture, we have something for everyone. Our events are expertly planned and led by experienced guides, ensuring that you have the trip of a lifetime. We also offer training and preparation programs to help you achieve your goals. Don’t miss out on the adventure of a lifetime! Visit our website to see our upcoming events and book your spot today!
https://annaliptak.com/travel/

No comments to show.

Get all latest content delivered to your email a few times a month.